Crown Wood Primary School’s Attendance Policy is set in consideration and consequence of the provisions of the following:

In so far as any specific provision of the above does not automatically apply to all schools, this school, as an Academy Trust school, in setting its own Attendance Policy, adopts and follows the provisions and effect of the above.

All children of compulsory school age have the right to an efficient full-time education, regardless of age, aptitude, ability and any special needs s/he may have. The Education Act of 1996 states that a parent is responsible for ensuring their child attends regularly and punctually. Regular school attendance is essential if a child is to make the most of the educational opportunity available to them.

Crown Wood Primary School takes seriously its responsibility to monitor and promote the regular attendance of all its pupils. It acknowledges that irregular attendance seriously disrupts continuity of learning, undermines educational progress, can lead to underachievement and low attainment and impedes the child’s ability to develop friendship groups within school.

Parents, guardians and carers must ensure that they are fully aware of the school’s policy concerning required attendance and with regard to the authorised and unauthorised absences of its pupils. This document details the responsibilities of individuals and groups involved and the procedures in place to promote and monitor pupil attendance. The Governing Body has appointed a governor to oversee attendance matters.

This school expects its Pupils to attend school for the entire duration of the academic year, unless there are good reasons for the absence and the absence is authorised.

There are two main categories of absence:

Please be aware that when a parent telephones the school with information that their child is unable to attend due to illness or other circumstances, this may not be automatically authorised. Your child’s current and previous school attendance will be taken into consideration and as a result the absence may not be authorised.

Keeping your child off school with minor ailment such as headache or cold is not acceptable. Repeated absence will require us to request that you obtain evidence from your doctor’s surgery, such as a stamped appointment card or a prescription. Please note that the school is not asking any parent to incur a charge for this information and will not be liable for the cost.

School starts at 08:50 a.m. Registers are taken immediately; they are taken again at the start of the afternoon session. 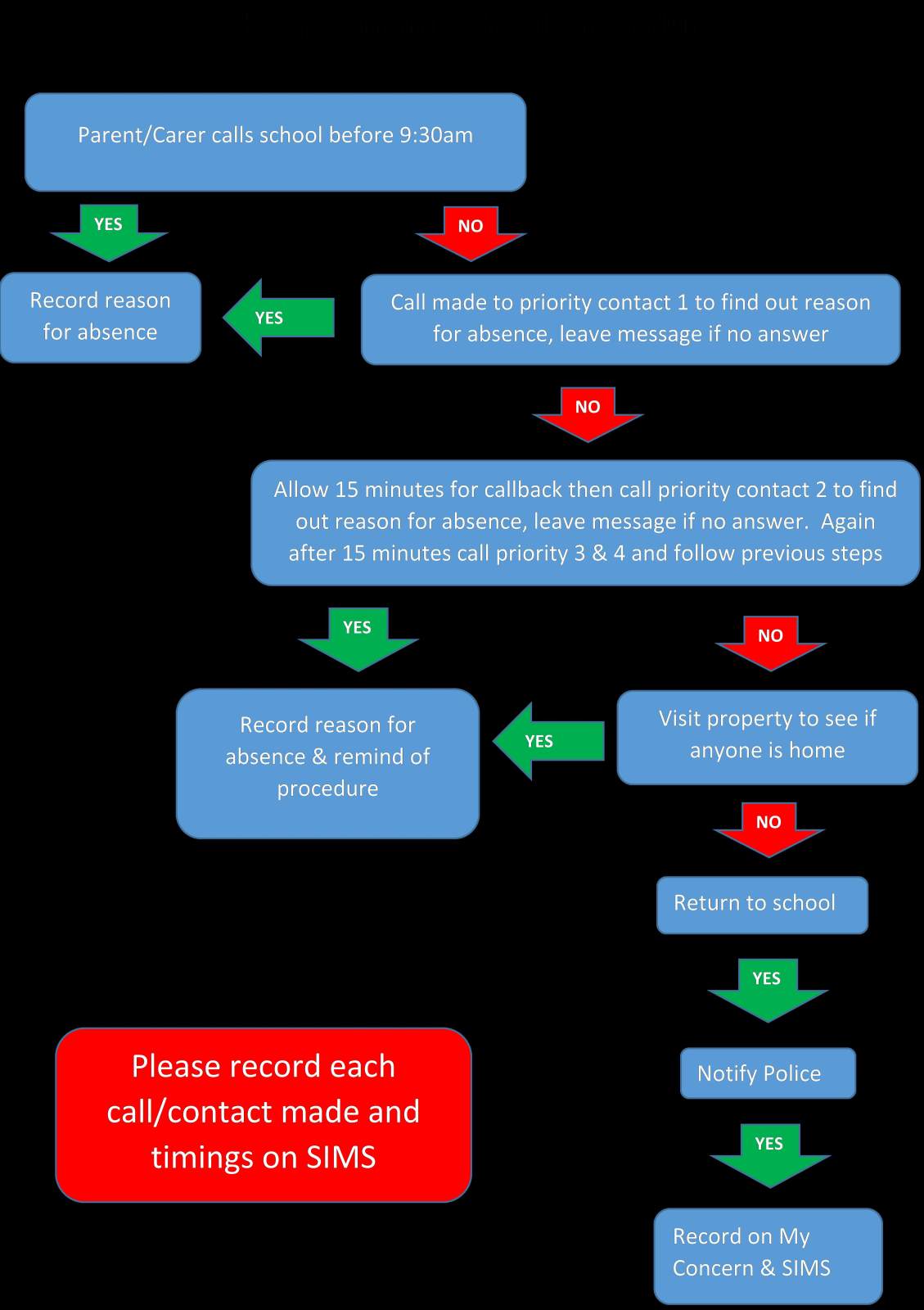 Parents and carers are expected to bring their child to school on time.  A child arriving after registration i.e. after 9am is disruptive for the class and embarrassing for the child. Vital information is given at the start of the school day and the child’s learning may be affected if he/she is not present for the full session. Punctuality is an important life skill. Persistent lateness will be followed up by the school and may be referred to the Education Welfare Service if it continues.

Parents are not permitted to take their child to the classroom as this disrupts teaching. If the arrival at school is after the registers have closed, the pupil will receive a 'U'.  This equates to an absence although we are aware that the pupil is on the school premises in accordance with health and safety requirements.

If a pupil is late due to a medical appointment, they will receive an authorised absence coded 'M'. Please be advised that where possible doctors and dentists appointments should be made outside of school hours or during school holidays. You may be asked for proof of the appointment.

At Crown Wood Primary School we believe term time absences should be actively discouraged. Our purpose is to ensure that your child achieves to their full potential and there is a clear link between poor attendance and underachievement.

However, we recognise that there may be occasions where a parent considers there are extenuating or compassionate reasons for such absence. As outlined in the Education (Pupil Registration) (England) (Amendment) Regulations 2013, the Headteacher will decide if the circumstances are “exceptional” and thus whether or not the absence will be “authorised”.

Parents must request leave as far in advance as possible, giving at least 2 weeks’ notice.

The request, to be made by the parent with whom the child normally resides, must be made in writing using the “Application for Leave of Absence During Term Time” form available from the school office.

The request must include the reason why it is felt necessary to take leave during term time (the “exceptional” circumstances).

Leave of absence will only be granted where the Headteacher considers it is due to ‘exceptional circumstances’. Parent will be informed by letter within 7 school days as to whether the request has been authorised or unauthorised.

The parent who submitted the application for leave of absence during term time will be notified by the school in writing within 10 days of the school’s decision in response to the application.

Term time absence taken without authorisation may, where the criteria for doing so is met, be referred by the School to the Educational Welfare Service.

As a school we agree and endorse Bracknell Forest Council’s “Code Of Conduct and Protocol For The Issuing Of Fixed Penalty Notices (Revised June 2017).

If a Fixed Penalty Notice is issued, a separate Notice may be issued to each parent for each child. THE RATE PER PARENT PER CHILD WILL BE £60 IF PAID WITHIN 21 DAYS AND RISING TO £120 IF PAID BETWEEN 22 AND 28 DAYS.

If an issued Fixed Penalty Notice is not paid within the prescribed time limit for payment, each parent may be liable to prosecution at the Magistrates’ Court for an offence contrary to Section 444 Education Act 1996, (failure to secure regular attendance at school of a registered pupil of compulsory school age), in the same way as if the Fixed Penalty Notice had never been issued.

Prosecution for the substantive offence, if proved, may, in respect of the less serious offence contrary to S. 444(1) Education Act 1996 (being the parent of a child of compulsory school age who fails to regularly attend school), result in each such parent receiving a criminal conviction and /or Sentence by way of a Fine not exceeding £1,000.00.

Prosecution for the substantive offence, if proved, may, in respect of the more serious offence contrary to S. 444 (1A) Education Act 1996 (where the parent knows that the child is failing to attend regularly at the school and the parent fails without reasonable justification to cause that child to regularly attend school), result in each such parent receiving a criminal conviction and / or Sentence by way of a Fine not exceeding £2,500.00 and / or to a term of imprisonment not exceeding three months, or else any such community based Sentence as deemed appropriate by the Court.

In addition, in all cases where one of the substantive offences is proved, the Prosecution will seek an Order for the Defendant to pay a contribution towards the Prosecution Costs of the case, including investigation costs, the application for which will be served upon the Defendants at the time of the relevant Court proceedings.

In addition to any other Sentence imposed, the Court has the ancillary power to impose a “Parenting Order”, not exceeding 12 months in duration, on parents, where the Court considers such an Order appropriate. Any person found guilty of failing without reasonable excuse to comply with the requirement of a “Parenting Order” or with a direction of the nominated Responsible Officer in respect of it is liable to Breach proceedings and, in the event of conviction for the same, to a fine, not exceeding £1, 000.00, and or any other non-imprisonable Sentencing option available to the Court in such case.

Authorisation for term time leave will not be given for the following reasons:

Any absence that has not been authorised may be referred to the Education Welfare Service and, where the criteria for doing so is met, may result in prosecution proceedings or a Fixed Penalty Notice being issued per parent per child.

There are 190 school days (380 sessions) a year which every child is expected to attend. There are also approximately 71 days (142 sessions) of school holidays. Parents should ensure that family holidays are taken during school holiday periods only.

The role of the school management

Pupils learn best when parents and staff work in partnership to maximise pupils' attendance at school and everyone is clear of expectations and procedures. We expect that as soon as your child starts their education at Crown Wood Primary, you will abide by our attendance policy.

The staff at Crown Wood Primary has an obligation to enquire and challenge the reasons for pupils' absences and/or lateness and do insist on written evidence for any such absences. There is also an expectation that the staff report concerns over absence and lateness to the Headteacher.

The school may send letters to parents, guardians or carers as to their child's current attendance level, unexplained absences or lateness or any other concerns.

The school collects information daily and weekly from the registers on absences.

The role of the Education Welfare Service

Section 444 of the Education Act states that "if a child of compulsory school age, who is a registered pupil at a school, fails to attend regularly at the school, the parents are guilty of an offence".

Bracknell Forest Council, through the Education Welfare Service, may issue a Fixed Penalty Notice or prosecute parents when children do not attend school regularly.

A Fixed Penalty Notice when requested by a Headteacher can be issued as long as the evidence for the request is robust and the following criteria are met:

*It is incumbent upon the parent(s) in such circumstances to provide proof of reasonable justification, for example, that the child or young person needed to attend a pre-arranged medical appointment, or a medical emergency requiring the child to be supervised elsewhere then at home.

A Penalty Notice will be issued on the first occasion if appropriate.

When a pupil is referred to the Education Welfare Service because of persistent poor attendance there are various actions that can be taken to try to bring about an improvement. The Fast Track Intervention framework promotes early intervention and aims to ensure that appropriate action is taken to tackle non-attendance as soon as attendance problems become apparent. Fast Track involves engaging the parent in specifying what improvements need to be made over a fixed time-frame (usually 8 weeks). Parents have the responsibility for ensuring that their child attends school regularly. Where a parent fails in this responsibility and no improvement is brought about within the specified time frame, legal proceedings may be initiated in the Magistrates’ Court.

We celebrate good and excellent attendance throughout our school.  This may include giving certificates to individual children whose attendance is good or excellent; praising classes when there is consistently high attendance and awarding a certificate to the winning class.

What parents can do to help

Please work with the school staff and ensure you are fully aware of the school's attendance policy as this has a huge impact on a pupils learning.

If parents, guardians or carers are worried about their child’s attendance at school they should:

The role of the Governing Body:

It is the Governors legal responsibility to monitor and evaluate the attendance in their school.  The school's attendance figures are presented to the Governing Body on a termly basis via the Headteacher’s Report.